We left Ginetta Cars Ltd in receivership in the autumn of 1992. Why Barclays Bank had taken this precipitative action is still a mystery since many of the issues facing the new owners had actually been resolved. The company had planned to launch the improved G33 SC and entry level G33 Club at the NEC Motorshow in October, and this went ahead under administration.


The new cars were well received, but Barclays Bank did not get the quick “going concern” sale of the business that they had expected, and Cork Gully liquidated the business at the end of the year. The factory unit in Scunthorpe was sold off and attempts were made to find a buyer for the stock, rights, goodwill and the remaining plant and machinery.

Martin Phaff, acutely aware of the  “unfinished business” that he had started convinced a number of former dealers to join him in re-acquiring the business – each had also made a considerable financial commitment to the Ginetta brand.

The new multi-national owners of Ginetta emerged with stock, goodwill, jigs and fixtures and some tooling, but little else, and the business was re-established in an old steel stock warehouse in Rotherham, South Yorkshire. Interest from potential customers clearly existed for the longer wheelbase and improved G33 SC, and the 4 cylinder Ford Zeta powered G33 Club, but the rear-engined G32, even in convertible form had already effectively priced itself out of the market.

But the  re-started company did not have the resources or working capital to produce and sell complete cars, and the Board took the decision to step back to the tried and tested G27, which was an updated version of the classic sixties G4. The G33 was also offered briefly in kit form, after the cars already in-build had been completed, but proved to be too expensive and complex. Production of the “heritage” models G12 and G4, which had been destined for Japan, and which had been the cause of the unfortunate yen bank loans two years before, continued briefly but suffered contractural problems and was discontinued.

But as had happened to the Ginetta in the past, it was to be motorsport that would provide the direction for its future. Whilst private entrants had continued to enjoy racing success with various models, the last “works” involvement had been with the G22 Sports 2000 in 1979 and the G29 Thundersports in 1986.

Until the arrival of the G33, the Ginetta model range had not been competition orientated for several years. But the lightweight V8-engined G33 was instantly competitive, particularly in sprint and hillclimb events. Swedish dealer, and subsequent shareholder Ingmar Engstrom worked on the G33 and had engineered a Ford Cosworth Turbo engine installation and  raced the prototype in Sweden. The 2-litre turbo engine was added to the factory option list prior to the 1992 receivership.

At the end of 1992 the revised G33 caught the eye of the ex-General Motors Corvette designer Larry Shinoda, who was working with an industry consortium to produce a “halo” sportscar for the ailing Oldsmobile division, and the prospect of the G33 becoming the Rocket 44 was tantalising, but in the end came to nothing, as did the plan to build it and other models in Sweden. (see another “Ginetta Story” - Rocket 44! ). But the Rocket 44 project would have had a Bridgestone-backed one-make race series as part of its promotion, and the idea would re-emerge three years later………….

After pursuing the Rocket 44 project, David Tearle, as Technical Director of Ginetta Cars Ltd was able to establish that the total production numbers of the G33 in its various models had reached the 100 required for homologation, and the G33 was accepted by the RAC MSA as a production sportscar for motorsport purposes. UK Ginetta dealer Motorsport Classics of Corby, Northamptonshire (David Tearle and Richard Issitt were co-directors) then built up a G33 Cosworth Turbo to race in the 750 Motor Club Roadsports series, into which the type was now accepted. This car was competed in 1995 on a limited budget, and became another link in the Ginetta motorsport revival process.

Although no longer technically in production, the G33 was now a homologated sportscar, and it became apparent that this approval could extend to the new National (and International) GT regulations, since Ginetta Cars was a “proper” established car manufacturer. After discussions with the BRDC it was established that the G33R would, with some modification be accepted into the GT2 category of the Privilege National GT Championship for 1996. 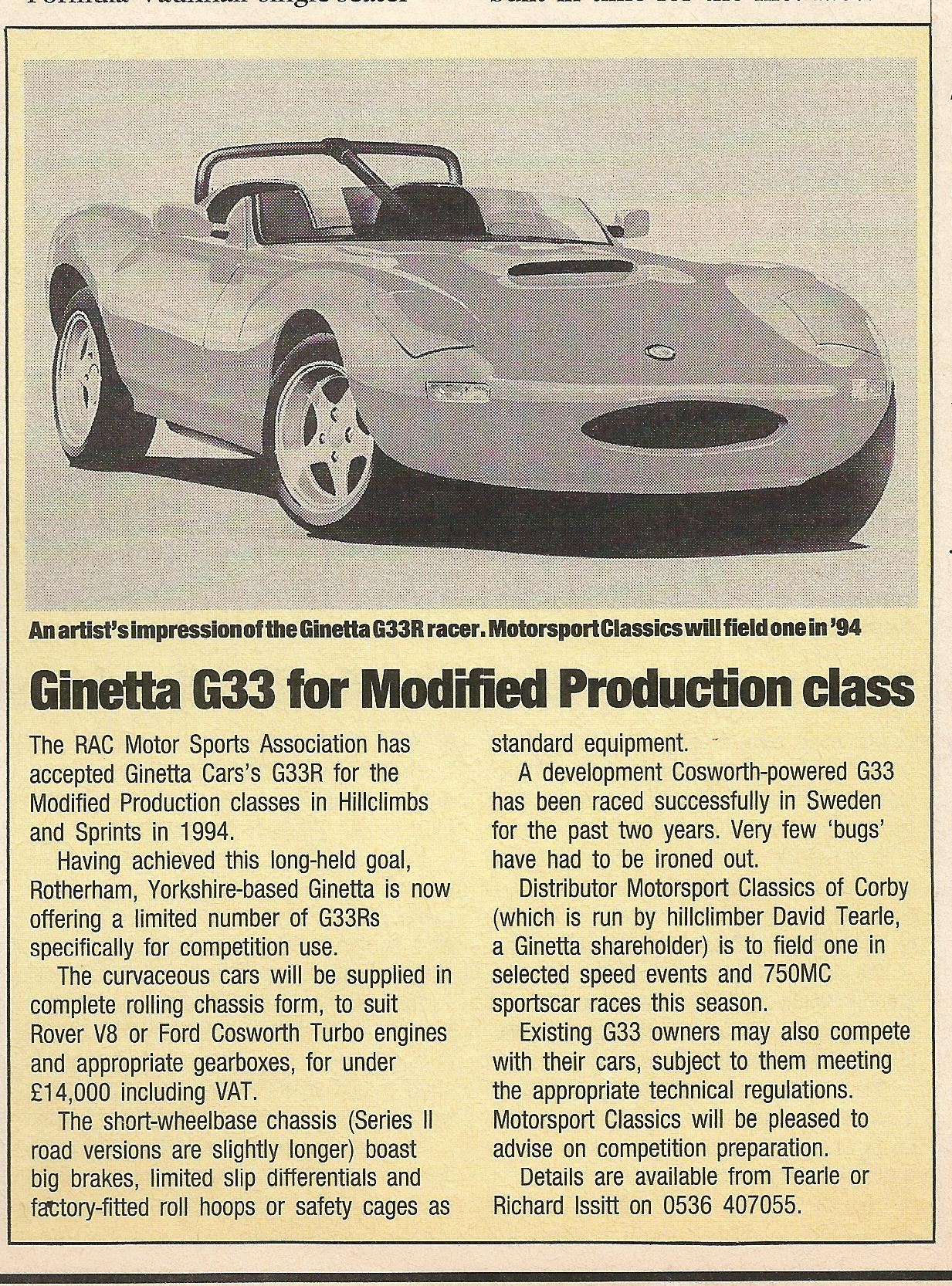 This was perhaps a step to far for the company, and would have to wait, but the idea  of selling complete “racing” cars rather than finished road cars or component sets was very attractive. Complete racing cars would add more value than kits, would not require costly Type Approvals, and did not need warranties, at least in the conventional sense. And racing cars, by their nature, would generate substantial parts sales from crash damage………..

The idea of a one-make race series was certainly not new in 1995 (TVR, Caterham, Rover, amongst others), but turning the humble G27 into a rugged and very affordable racer was inspired – inspired that is by Martin Phaff, Marcus Pye, Mark Hales, amongst others.

The G27, and before it the classic G4 had been used in competition for many years, and there was a body of knowledge, particularly with Duncan Campbell at the factory that enabled the production of a reliable and competitive racing sports car at a budget cost. The G33, although technically superior to the G27 was also more complex and expensive to build and repair.

The technical specification of the car was settled on a (sealed) Ford Zetec 1.8-litre twin cam (from the Mondeo saloon), on Weber carburettors (rather than fuel injection), a Ford based Trannex gearbox and Ford Escort rear axle. Permitted modifications by competitors were strictly limited and a common (and interchangeable) ECU was used. The resulting 150bhp in a car weighing less than 800kg provided an effective package, which was aimed at the amateur weekend racers who were thought to be the target market. The price of the car included race entries, race overalls, hospitality and trackside support. The BARC were supportive from the start and offered to include the fledgling Bridgestone-backed G27 series in the National GT racing support package with the added bonus of TV coverage.

A prototype was built and the new series was announced in the press. Test days were arranged for interested parties at the end of 1995, and as a result a few firm orders were taken. There followed an anxious few months spent trying to square the circle of sufficient orders to make a grid against the cash and resources to build the cars. The nightmare scenario was just too few orders and no race series and customers demanding their money back. But the first Championship race took place at Castle Combe with 16 cars on the grid. Martin Phaff had made it!

As part of the series promotion it had always been intended that a spare “works” car would be available for motoring journalists, most of whom had a point to prove! (Over time the “press” car became a “celebrity” car, which had a real impact on the media and public awareness of the Ginetta “brand”). 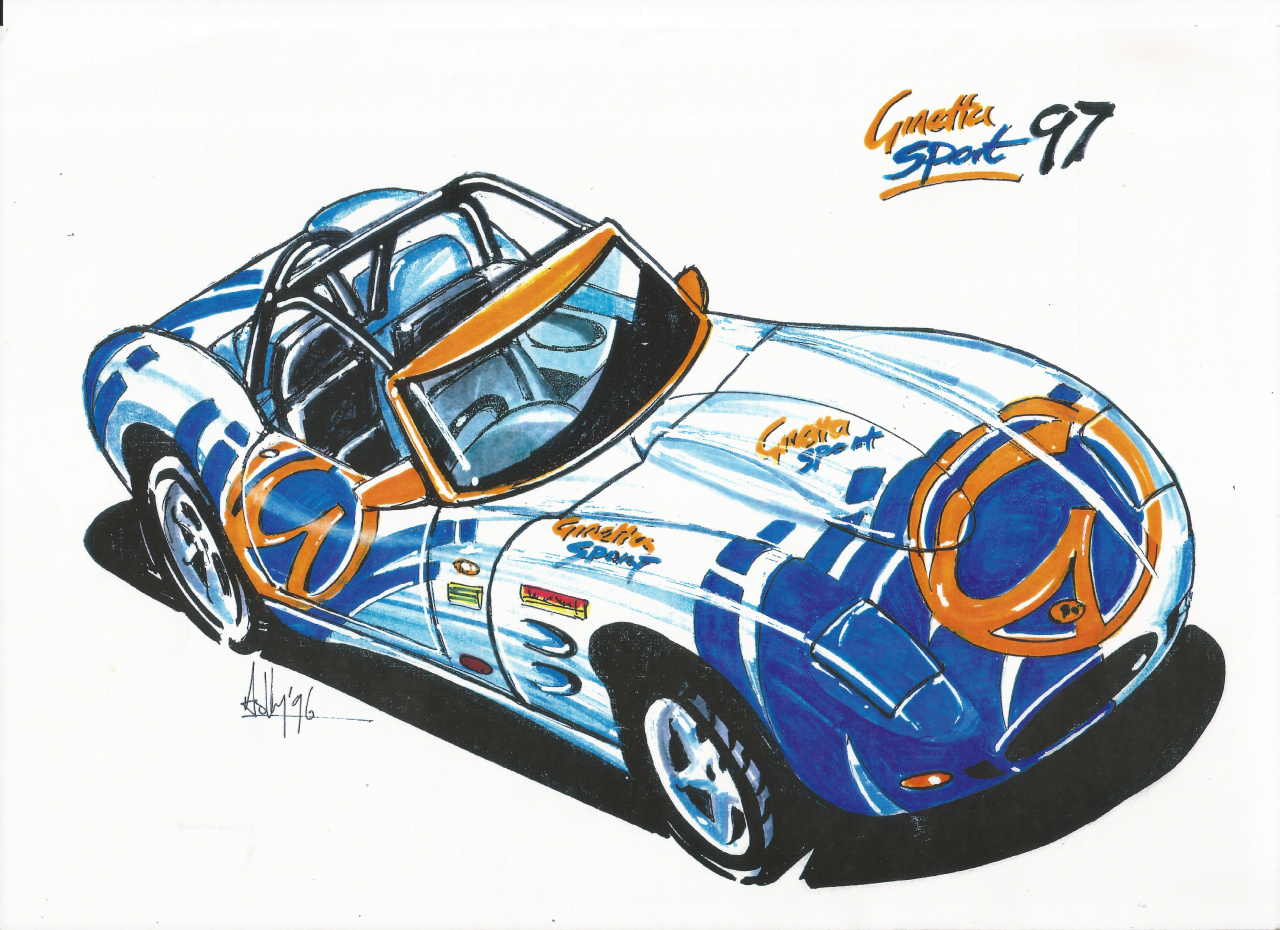 The success of the race series did not do much to improve the profitability of the company, but it did keep it going and its image was changing, and it was now perceived as a race car company rather than a kit-car company.  Motorsport had boosted the Company in the Sixties with the G4, G12 and G16 and the G7, G8 and G17 single seaters, so maybe history was repeating itself…..


The G27 Championship grew from strength to strength with ever increasing grids, and since it was part of the F3/GT support package the prospect of competitors moving up to the GT category with Ginetta was considered. The G33R Cosworth Turbo would be suitable and competitive for GT2.  The company did not have the resources to develop a GT2 G33R, but floated the idea of a component kit, to include a strengthened G33 SC with full FIA roll-cage installed for completion by the race teams that had become part of the G27 Championship.

The G33 GTR as it had been designated was eventually shelved, but it did lead to an opportunity at the end of 1996 for Ginetta to make the move into International GT racing and to Le Mans. This project became the G40 GTR and the road-going supercar G40 GT, which is the subject of a another Ginetta Story!.............(see Ginetta G40 GTR!) 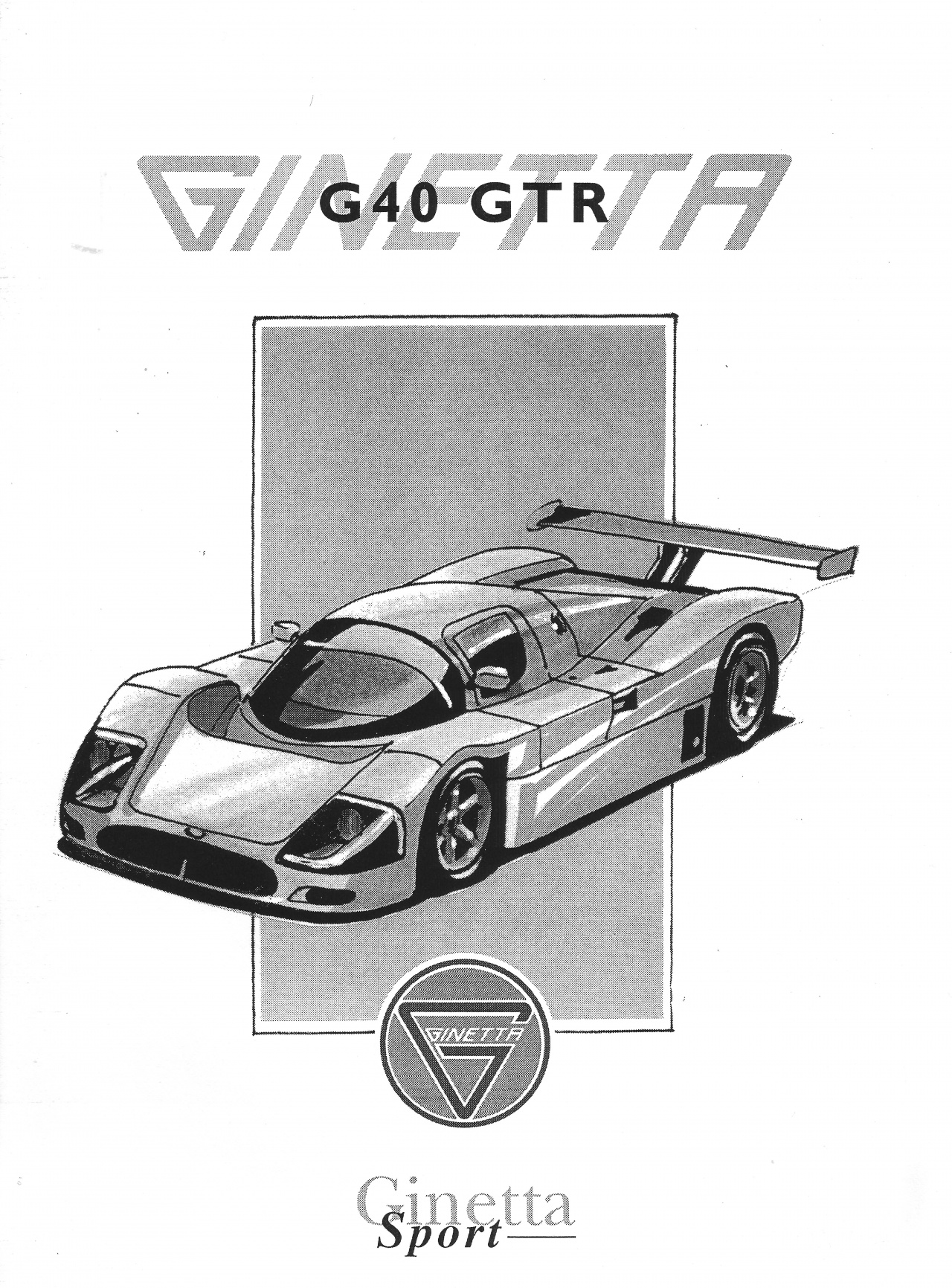 The G40 GTR project was probably too good to be true and was finally shelved at the end of 1997, and is now just an intriguing historical footnote in Ginetta's history.


The G27 Championship, however, continued to prosper and become more “corporate", always driven tirelessly by Martin Phaff. In 1999 Pentel took over as the headline series sponsor. It had come a long way since 1996, and was already being considered as a serious entry point into professional motorsport – able drivers were able demonstrate their skills on TV and to the promoters of the higher formulae in the package. Similarly race teams were also to showcase their skills.

The full history of the Ginetta sportscar championships is yet to be written, but in 2002 Hill House Hammond took over as main sponsor, and the venerable G27 was replaced by the G20. A major and significant change came with the Ginetta Junior Championship, yet another Martin Phaff initiative made possible by the new MSA 14 to 16 year young driver category. Since then the Ginetta Junior Championship and the G40 has been a huge success, and has launched the careers of many young racing drivers, just as the “senior” Championship had already done, and still does.

Martin Phaff had done the hard work, almost single handed, to achieve this success and there is no doubt that his health suffered as a result. It was time to find a new owner for Ginetta Cars.

When in 2005 Martin was approached by Lawrence Tomlinson (who had himself cut his racing teeth in the Ginetta Championship) with a view to acquiring the Company and taking it forwards with the capital it needed, the Board and shareholders agreed more or less unanimously that it was the right thing to do.

Martin Phaff stayed with the Company to run the race series for a while, before he moved on – not into retirement - but to create the Junior series with the ex-Formula BMW cars, in conjunction with Racing Steps.

Ginetta Cars Ltd, under Lawrence Tomlinson now has the financial backing that it had needed since its reformation in 1993, and its reputation is now as a serious contender in motorsport and driver progression. The “kit-car” image has long.   Martin Phaff and the disparate group of dealers and investors that he assembled in a restaurant in Leuven in Belgium in 1993 had a lot to do with success.................. 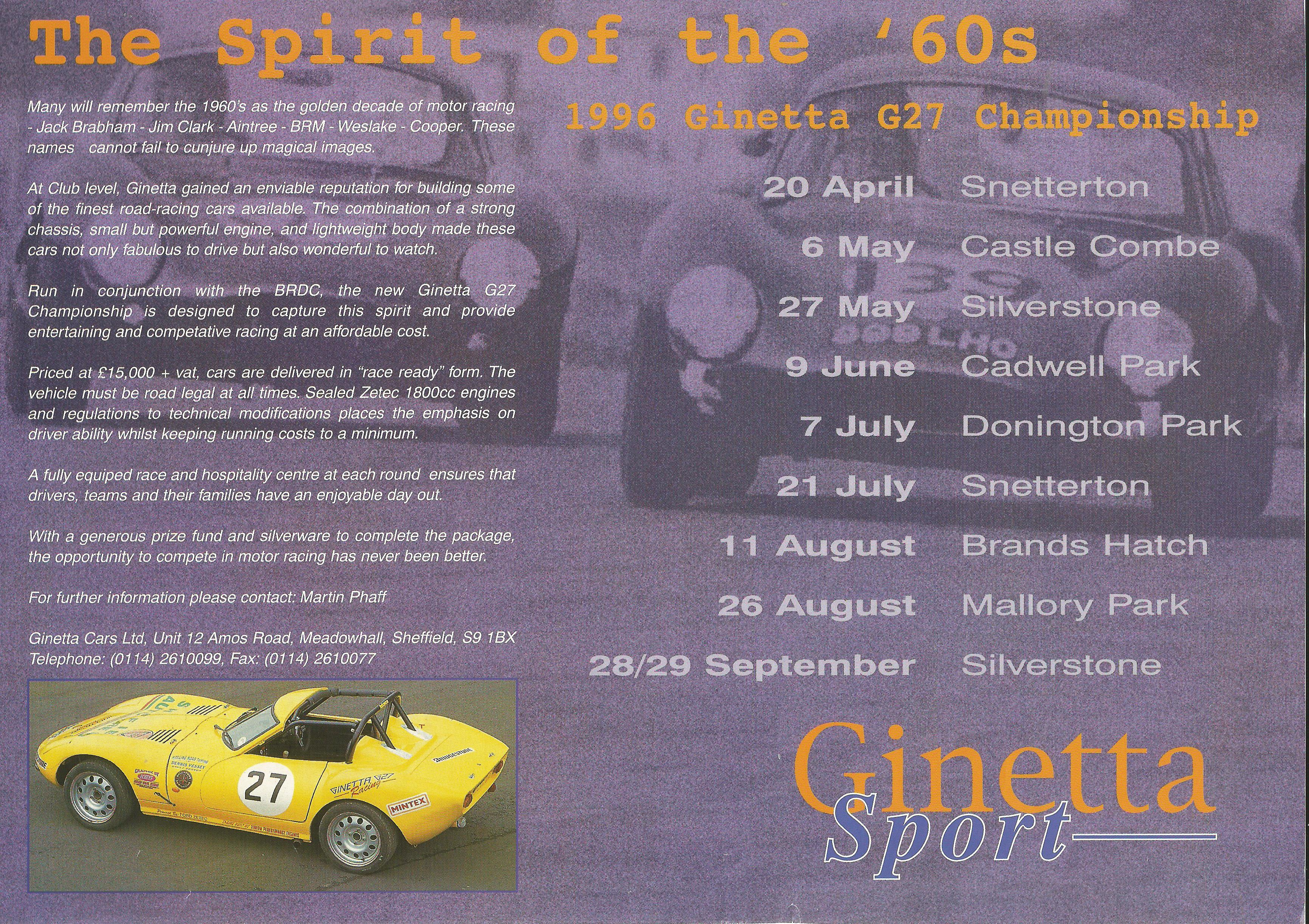