3This piece from "Same Old Game!"  explores the paradox of the John Tenniel cartoon that was published on Saturday 8th November 1890.  © David Tearle


The City of London and, in particular, the Bank of England had become very nervous in the early autumn of 1890, with concern for the “highest houses” as a result of over ambitious speculation in South America, and in particular Argentina. The collapse of the Argentine government in August had only heightened the anxiety. The London Times and The Economist had issued warnings about the unsustainable nature of the bubble that was being created, and the activities of some of the” highest houses”, in particular Baring Brothers & Co.

“The City has passed through a crisis verging upon panic such as has not been known since the awful   Black Friday that followed the suspension of Overend, Gurney& Co, nearly a quarter of a   century ago. Happily men have kept their heads better than they have done on former occasions, and   though the strain was tremendous, though the fall in securities was heavy, and though the most   alarming rumours were flying wildly about, we rejoice to be able to announce this morning that the   worst is over…………………” 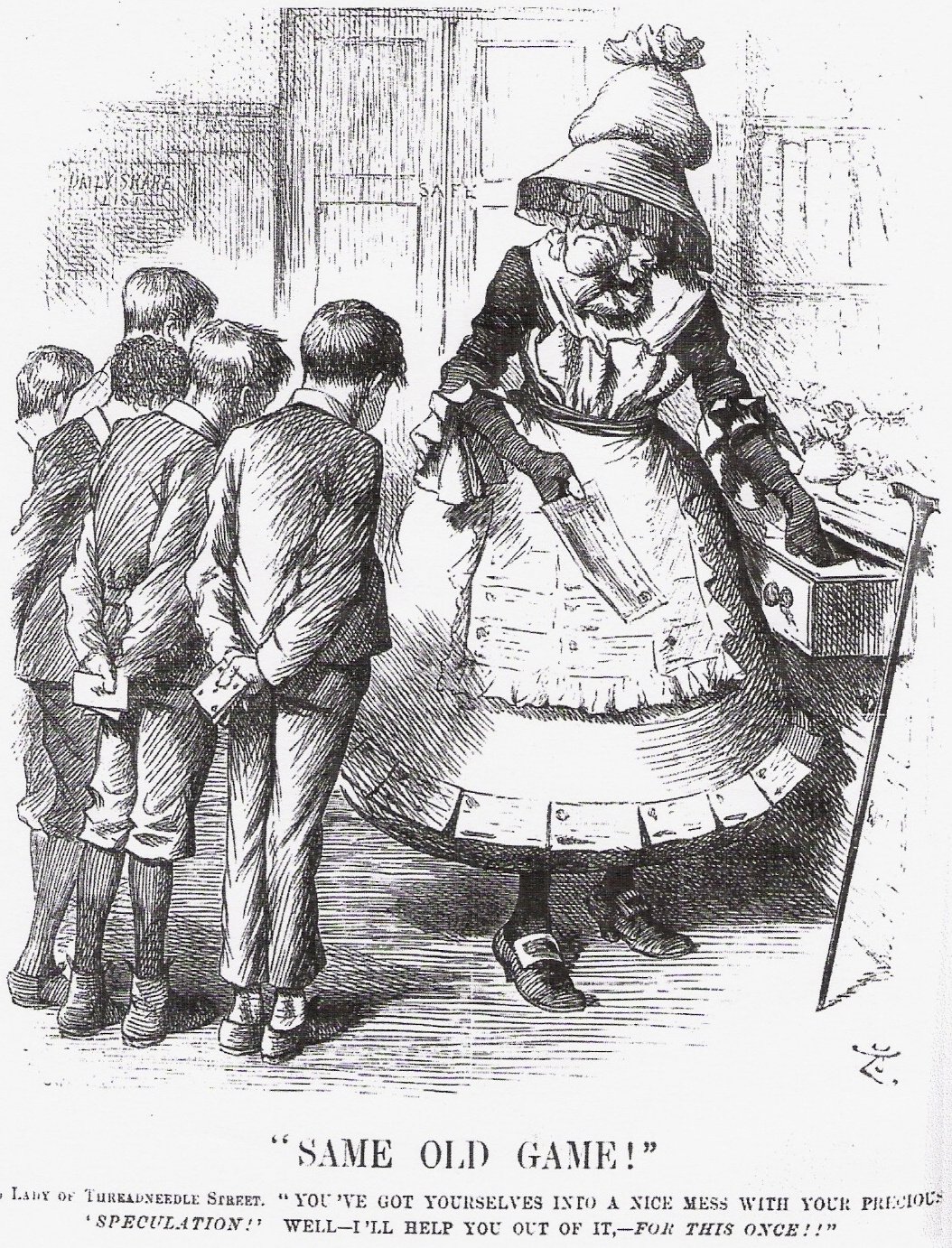 Just seven days earlier, on Saturday 8th November the Governor of the Bank of England, William Lidderdale met Lord Revelstoke and Francis Baring to learn that it was indeed the House of  Baring that was the subject of the rumour, and that without help they would have to stop. Lidderdale sent a message to the Chancellor of the Exchequer, Lord Goschen, requesting that they meet to discuss a “matter of great importance”, on the morning of Monday the 10th. Lidderdale spent a very uncomfortable Sunday 9th because he knew what was about to happen, and Lord Goschen spent an anxious Sunday because he did not.

But Saturday the 8th November is the very same day that Punch published the John Tenniel cartoon, “Same Old Game!”;

The Old Lady of Threadneedle Street: “You’ve got yourselves into a nice mess with your precious speculation! Well, I’ll help you out of it   - For this once!!”

We now know  that The London Times and The Economist  were on to the story (that Barings had become dangerously exposed to their Argentinian “speculations”) during the week ending 8th November, and probably some-time before that, but held back from anything other than oblique references to avoid precipitating the disaster in the City that thankfully never happened.  So who tipped off John Tenniel and Punch magazine that the Bank of England was about to bail-out the schoolboys in the cartoon? And who were the schoolboys meant to represent?

At first sight it would seem to be a well-timed topical satire on the City in general, or at least those engaged in South American speculation, but two weeks later, on the 22nd November Punch followed up with another article, entitled “For this Relief Much Thanks”, which confirms, without doubt to whom Mr. Punch was referring in his cartoon “Same Old Game”. Saturday 22nd of November was also the day that The Economist published its leader “The Liquidation of the Barings”, so again Punch found itself slightly ahead of the game………….

This piece published on 22nd November 1890 in Punch Magazine reads:

“FOR THIS RELIEF MUCH THANKS”

“For this Relief Much Thanks” – The difficulties in the City, which Mr Punch represented in his cartoon of November 8th, were by The Times acknowledged to be at an end. The adventurous mariners were luckily able to rest on the bank and are now once more fairly started. They will bear in mind the warning of The Old Lady of Threadneedle Street, as given to the boys in the above mentioned cartoon”.

On the same day, Saturday 22nd of November, The Times was able to announce officially that: “arrangements were concluded this afternoon for the continuance of the firm of Baring Brothers & co………………..”, or as Mr. Punch put it  “the adventurous mariners were able to rest on the Bank and are now once more fairly started”. Since the “once more fairly started” Barings Brothers Bank Ltd was not actually incorporated until 23rd November, Mr. Punch continued to be very well informed indeed!

“For This Relief Much Thanks” , in sixty five words of Shakespearian reference delivered an intellectual hammer blow to Edward Charles Baring, Lord Revelstoke, the references in which may not been decoded for over 120 years.

“For This Relief Much Thanks” is from Hamlet (1.1.10), dialogue between Francisco and Barnado, and the line goes on “ ‘tis bitter cold and I am sick at heart”, and precedes the famous line “something is rotten in the State of Denmark”, referring to corruption and a diseased country, or in this case, presumably, a bank.

“The Adventurous Mariners” are from The Tempest; Prospero and Miranda stand on the shore of the island (the bank – of England!), having just witnessed the shipwreck that resulted from the storm of their own creation.

So it is fairly clear what Mr. Punch felt about Barings (and probably bankers in general) and that they had brought the crisis on themselves. And so they did.

Lord Revelstoke was a cultured man, with a love of art and the theatre - indeed according to his son (Maurice Baring, himself a well-known author in his time) would have been able to act as prompt to any of Shakespeare’s works. “For this Relief Much Thanks” was an acerbic attack, which for him would need no interpretation.

So Mr. Punch was not impressed by Lord Revelstoke, senior partner at Barings, and he, The Times, The Economist and others had been gunning for him in particular since the Guinness flotation in 1887, underwritten by Barings, and who had held back shares for friends and family, and left the public subscribers with little or in many cases, nothing.

But Mr. Punch was not quite finished with Lord Revelstoke; a week later in the edition of 29th November 1890 he continued his relentless Shakespearian excoriation with:

RIGHT-DOING ON THE RIALTO

OR, THE MODERN SHYLOCK (A Short Shakespearian Sequel)

Shylock: Five Millions sterling for three months? And this you say they will advance, if you can show sufficient guarantee?
Baringo: Indeed ‘tis so
Shylock: Well, Well! But how  comes it about that you whose honoured name has so long held the sway of all safe dealing, that men only asked “If a BARINGO backed it”, to take up unquestioning the newest stock, - should thus with sudden flash flare up and set in blaze the whole commercial world?
Baringo: Oh! Press me not, nor question me too closely! “Argentines!” that fatal word sums up the evil spell that in these latter luckless days has fallen upon our swaying house.
Shylock: I see your case! A cry for gold finds you all unprepared, your capital locked beyond the seas. You cannot realise.
Baringo: Alas! Too true! That is the situation!
Shylock: Badly done! Ah! It has been a sorry piece of work, your “management”
Baringo: I bow my head to that! But you will lend your aid? You’ll pull us through?
Shylock : Listen BARINGO. Many a time and oft in this English land men have rated me about my moneys and my usuries. But that is long ago; the times have changed, and feeling in more righteous channel set, now turns itself in flood to sweep away the wrongs of vanished years. Nay, more than this.  But yesterday one of my ancient race, filled with his Christian colleagues heartiest will, the civic throne; and at this very hour a protest from all classes in the land from low and high, from peasant and from peer, goes forth to plead with the despotic power that ‘neath brute persecutions iron heel would trample out my brethren’s life. So there, which way I look I meet a greeting hand. So, not repeating here the vengeful plot of the old Shylock of the play; without my pound of flesh or pound of anything,- but solely for the bond of brotherhood that should link loyal workers in one field, count on my help in this your stress – for I will be your guarantee!
Baringo: You will! Oh, thanks for such blest help!
Shylock: Such help is only right,- so say no more!
Baringo; (aside) Thank Heaven! That ends our plight!
(Dances wild fandango of delight as Curtain descends)...................................


Right Doing on the Rialto refers, of course, to the City Guarantee Fund that was set up by Bank of England Governor, William Lidderdale, to underwrite any losses that the Bank might incur whilst liquidating the assets of Barings. Shylock (aka Lord Nathaniel Rothschild) was at first reluctant to join the Guarantee Fund, but quickly realised that exerting his right to” a pound of flesh” would destroy everything, not only for Rothschilds but the whole of the City of London. It was published on the 29th November, the same date that The Economist ran a leader entitled “The Reconstruction of the Barings” outlining how Barings Brothers & Co Ltd was to be re-established under the control of Revelstoke’s son, John Baring (who was later to become the second Lord Revelstoke), who, within ten years had restored Barings to a position of pre-eminence.

In some respects the Baring Crisis of 1890 was the “crisis that never happened” because certain individuals “kept their heads”, created a Guarantee Fund (that in the end was never needed) and left the City of London intact but shaken.

Not so lucky were the senior partners in Barings, in particular Edward Charles Baring (Lord Revelstoke); the Bank of England demanded its own “pound of flesh” by sequestering their assets and estates to the benefit of the Bank.

Lord Revelstoke’s wife Louisa Emily was devastated by the turn of events and died within 18 months. Lord Revelstoke never recovered and died in 1897.

Mr. Punch continued to attack the “fat cats” of the day before eventually being overtaken by other world events. We will probably never know who Mr Punch’s informants were over the Baring crisis, but I’m guessing that a staff writer at The Times never got his Guinness share allocation!**


“Same Old Game!”, is the most detailed analysis of the 1890 Baring Crisis so far published.

*Punch Magazine has been digitized by Project Guttenberg so is now readily available, and therefore easy to confirm that the publication went out on Saturday, every Saturday, and that this particular edition was not published late.  Each edition would have been typeset and printed a day or two earlier, and any artwork, e.g. cartoons drawn at least a day or so before that.

** Punch Magazine and the London Times had no official affiliation, but The Times would use pieces from Punch on an attributed basis during the period. The source for the John Tenniel cartoon is most likely to have been The Times.................