By the time of the Munich Agreement in 1938, when the British government finally accepted that war with Germany was inevitable and was taking desperate efforts to re-arm, it was left to British and French secret services to catch up with the extent of German and Italian readiness for a conflict. No serious reconnaissance had been done, and by this time it was too late to use military aircraft for the job.


The British Secret Service (SIS and later MI6) had become concerned as early as 1930, but its warnings to Government went unheeded.

Finding a way to fill the intelligence gap was achieved by two former WW1 pilots and a Mexican/American arms dealer with a very shady past............ 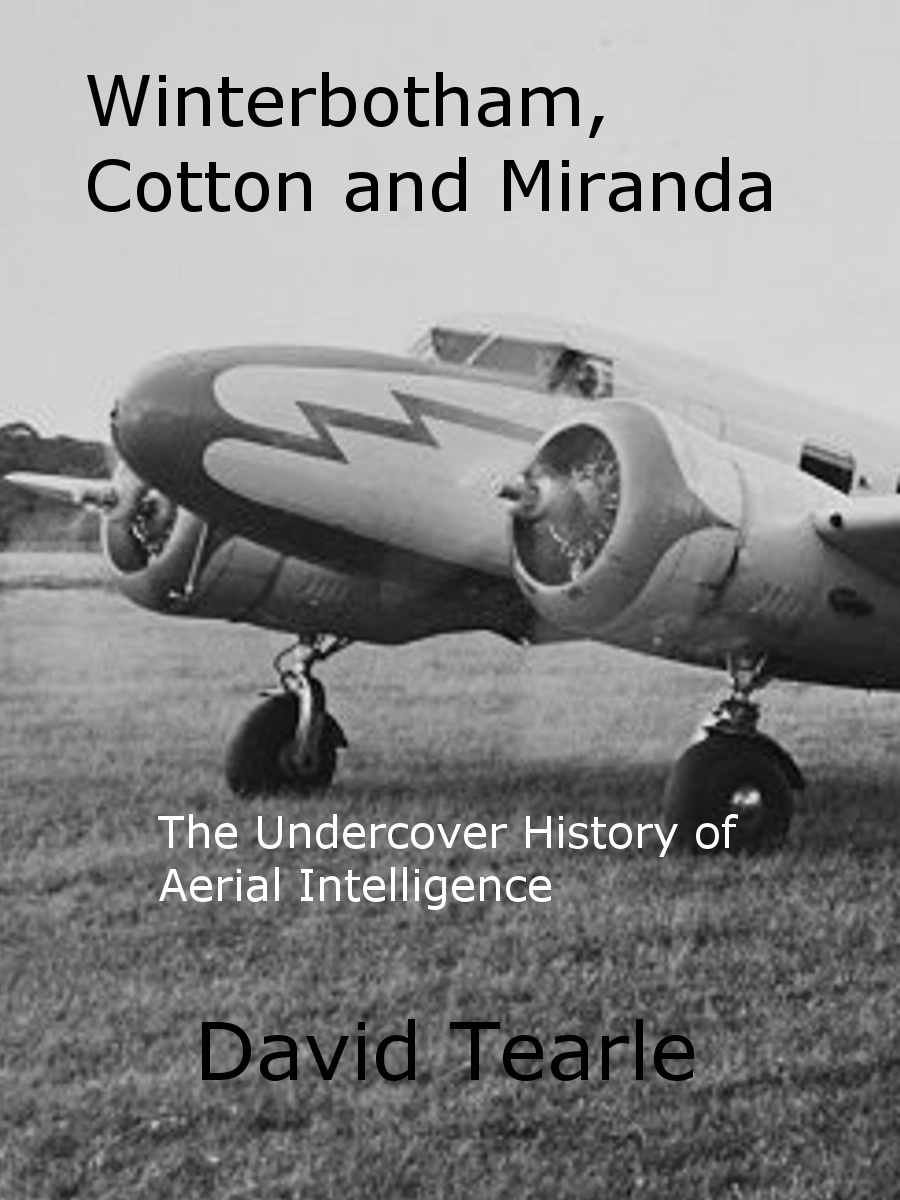 “Winterbotham, Cotton and Miranda” describes how three individuals with very different backgrounds were drawn into a world of aerial intelligence and espionage just before the outbreak of the second world war and played such a significant role in the Allied victory. The origins of the story, however, are much earlier, and go back to the creation of Britain’s Secret Service Bureau and the dawn of aviation at the start of the twentieth century.

For most of the nineteenth century Britain had been the most powerful country in the world, possessing the greatest empire ever seen enabling it to pursue a foreign policy of splendid isolation, largely impervious to threats from other nations. But by the end of the century her economic lead over the rest of the world was beginning to diminish, and the shear extent of the Empire was becoming a potential weakness rather than a strength.

As a result, between 1902 and 1907, in a series of strategic re-assessments, the British government attempted to come to terms with its rivals. Treaties were made with Japan, France and Russia. On the assumption that war was unlikely with the United States, that left one major challenge, that of an aggressive, ambitious and recently united Germany. Public concern about the threat was being whipped up by the British popular press, in particular the Daily Mail.

The Daily Mail, whose jingoistic proprietor Alfred Harmsworth appealed to like-minded readers because it stood “for the power, the supremacy and the greatness of the British Empire”. Sales more than doubled during the Boer War between 1898 and 1900, the paper claiming that “the British people relish a good hero and a good hate”.

From the turn of the century Harmsworth focused on the menace from Imperial Germany, pointing out that not content with becoming a mighty economic and military power, it had begun to construct a first-class navy to rival Britain, indicating global imperial aspirations. Sensational stories of spies, underground organizations and the threat of invasion took hold.  “The Riddle of the Sands”, written by Erskine Childers was published in 1903, and was followed by an avalanche of similar scare stories, mainly sponsored, of course by the Daily Mail.

All this was part of Harmsworth’s (now Lord Northcliffe) campaign to increase military expenditure to strengthen Britain’s defences against Germany. He took to publishing serials designed for dramatic and lurid effect. On 19th March 1906, the newspaper published the first instalment of ”The Invasion of 1910”, in which William Le Queux described in vivid detail a future invasion of Britain by Germany.

This fear of invasion became paranoia when in 1908 Count Zeppelin’s impressive dirigible airship was acquired by the German army and in France the Wright brothers demonstrated their remarkable and now undisputed advances in heavier-than-air flying machines. Britain was no longer an island – and something had to be done!

Such was the strength of public opinion that in March 1909 the Prime Minister, Herbert Asquith appointed a sub-committee of the Committee of Imperial Defence to consider ”the question of foreign espionage in the United Kingdom”, to be chaired by Richard Burdon Haldane, Secretary of State for War. In addition the sub-committee was charged with considering whether any “alteration was desirable in the system at present in force in the Admiralty and War Office for obtaining information from abroad”.

There was, in fact, no “system for obtaining information from abroad” to change; the army and the navy had their own intelligence staffs, concerning themselves with acquiring information on new weapons or ship construction by ad hoc means. There was, however, no mechanism in place to determine the political intentions of other countries or give a reliable warning of an enemy attack. Unlike France and Germany, Britain did not have a “secret service” dedicated to espionage, or even counter-espionage and as we have seen it was largely due to pressure from a fearful public and the Daily Mail that one was created at all.

Between March and July of 1909, the defence sub-committee met three times, and decided that they were “left in no doubt that an extensive system of German espionage exists in this country”. The committee went on to report that “Britain has no organization for keeping in touch with that espionage and for accurately determining its extent or objectives”, and further that “Britain’s organization for acquiring information about developments in foreign ports and dockyards is defective, particularly regarding Germany where it is difficult to obtain accurate information”

At the second of the sub-committee meetings, on 20th April it was proposed that a small secret service bureau might be established, on the lines of those that already existed in France and Germany, and a further sub-committee was set up, chaired by Sir Charles Hardinge, the Permanent Under-Secretary at the Foreign Office, to consider the matter.

With remarkable and uncharacteristic speed, Hardinge’s committee submitted a report on 28th April 1909, with just one unprinted copy which was to become the foundation of the modern British Intelligence service. Its key recommendations were that an independent “secret service bureau” be established with close ties to the Admiralty, the War Office and the Home Office that would “send agents to various parts of Great Britain………… with a view to ascertain the nature and scope of the espionage that is being carried out by foreign agents”; in addition, it “would act as an intermediate agent between the Admiralty and the War Office and a permanent foreign agent who should be established abroad, with the view of obtaining information in foreign countries”.

These recommendations were accepted in full by the main sub-committee on 12th July 1909, and the estimated annual cost (£2000 in 1909) was to be met from the “the present secret service vote” – which was under Foreign Office control. By this means the Foreign Office was able to control and administer the Secret Service for the next forty years. These arrangements were duly approved by the Committee of Imperial Defence on 24th July, and the details formalized on the 26th August.

To run the new bureau the War Office proposed a Captain Vernon Kell, “an exceptional linguist”, and the Admiralty nominated Commander Mansfield Smith-Cumming “who possesses special qualifications for the appointment”*

On 10th August 1909, Smith-Cumming was offered the job of “Chief of the Secret Service”, although he was disappointed to discover that Vernon Kell was to work with him on “equal terms”. The first formal meeting of the “Secret Service Bureau” took place on Monday 4th October 1909 at offices in 64 Victoria Street in Westminster. After some early confusion it was agreed that Kell would undertake the “home” work, both naval and military, and that Smith-Cumming should have charge of all “foreign” work, again both naval and military.

Britain’s secret services, shortly to be known as SIS and eventually MI5 and MI6 had started their journey; it may, may not be a co-incidence that the same year saw the transformation of the flying machine from a curiosity to a viable and exciting means of transport, and to those with imagination, the basis of a weapon that would change warfare forever.

Military minds in France and Britain were already considering how the aeroplane could be used for reconnaissance and the direction of troops and artillery in battle. But in Germany the Imperial Chiefs of staff had already established a military strategy for the expansion of the German state. It is notable that having witnessed the Wright Brothers’ demonstration of the capability of the Flyer, the German Army did not participate in the inaugural international aviation meeting at Rheims in 1908 – they were too busy placing orders for aircraft and powerful engines to propel them.

The Daily Mail had been right all along…………….